The Border Reivers were light horsemen who operated as cattle thieves along the English/Scottish border during the late 16th and 17th centuries.

The "Heidman" in the photo below is equipped in the latest fashion and is a veteran of the many wars and skirmishes across continental Europe of the time where many Scots fought as mercenaries and were exposed to the most modern weapons and equipment of the day. He is armed with a pair of wheellock pistols which weas the most advanced weapons of the day and expensive to come by. He wears a burgonet style helmet and 2-piece breast and back-plate. His pleated pants were a high fashion item of the day as is his embroidered doublet.

Our Display Offer for our Border Reivers team is to appear as a 2 to 4 rider team and we can either just ride around your venue in costume, interacting with the public or we can put on a full-scale Border Reivers mounted skills display including shooting longbows (a legitimate Reiver tactic) and blank-firing wheellock pistols (we have a rider Theatrical Endorsement to his New Zealand Fire Arms Licence).

Contact callum@jousting.co.nz for further information on our Border Reivers display. 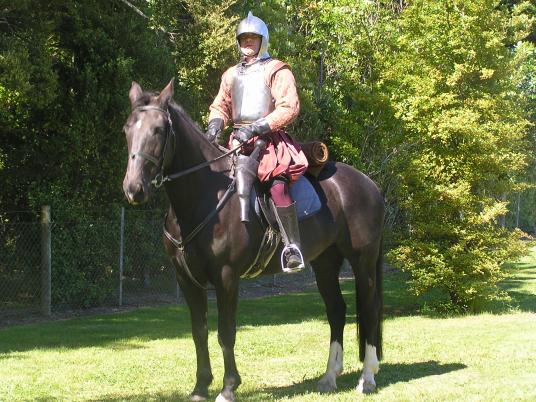